Teufelsberg Berlin used to be used by the allies as a spy station during the cold war to listen in on the Soviet forces.

Nowadays it’s in a state of disrepair having been abandoned by the allies at the fall of the Berlin wall, and the unification of west and east Germany.

Since then it has been in the hands of various private owners but nothing has been developed. It’s left relatively untouched, apart from the graffiti artists that is.

Graffiti artists from around the world come to do do their art there, often it will last for just a short while until the next artist paints over it.

If you like graffiti it’s one of the best places you can go in the world.

The ex spy station is set on a man made hill of rubble from the Second World War, which was placed on top of a nazi college that the allies couldn’t demolish.  You have to walk 30 minutes through Gruneweld Forest to reach it from the nearest train station.

Berlin is well known for it’s street art graffiti and a visit to Teufelsberg is a highlight of any visit to the city.

Get a Berlin Easy City Pass to get around easily and get discounts on some attractions:

The dome’s that housed some of the spy listening devices.

These figures are on the inside of the tallest dome there.

On the outside of one of the buildings at Teufelsberg.

You can scramble around the inside of the buildings where some of the best artwork is.

The tallest dome in the background. 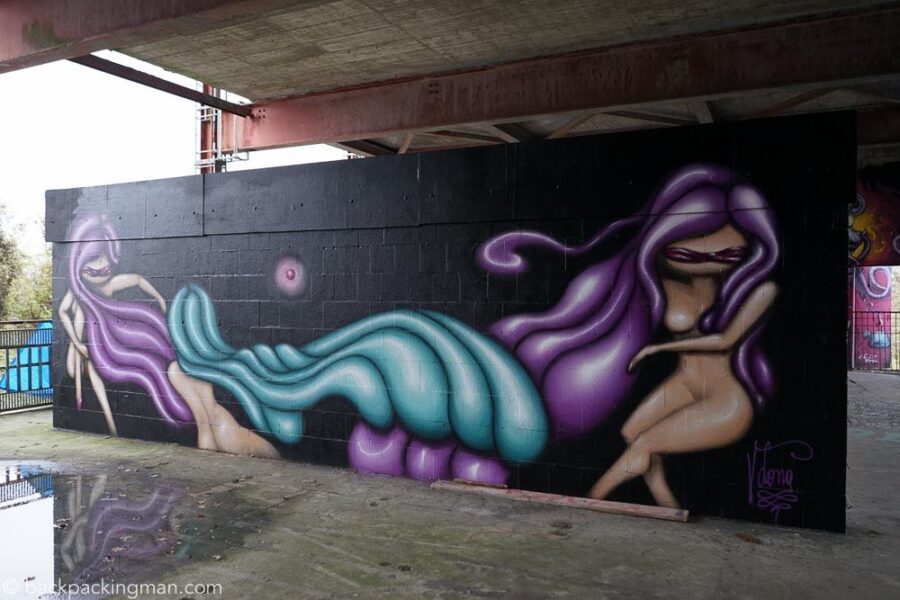 You can book a tour to Teufelsberg here:

More on street art in Berlin at the East Side Gallery.

If you’re interested in more cool things to see in Berlin then go check out some of the places the German series Dark was filmed around Berlin.

Get info on new posts (and old ones occasionally revised) by email.